Ext JS grid does not have a direct plugin or component to have grid inside a grid.  This functionality will be needed when we want to show the parent and child entity data at a time.     For example : We want to show the order line items for an order under each order in an order grid. We can achieve this requirement with the help of Row Expander grid plugin, but still the grid functionality like mouseover, click, column sort, etc would not work.
In this article we will understand  the root cause for the issues and learn how to address it.

First get below things in place

Add Child Grid to Parent Grid Row with the help of RowExpander Plugin as explained below:

With this code you will able to develop a grid as shown below: 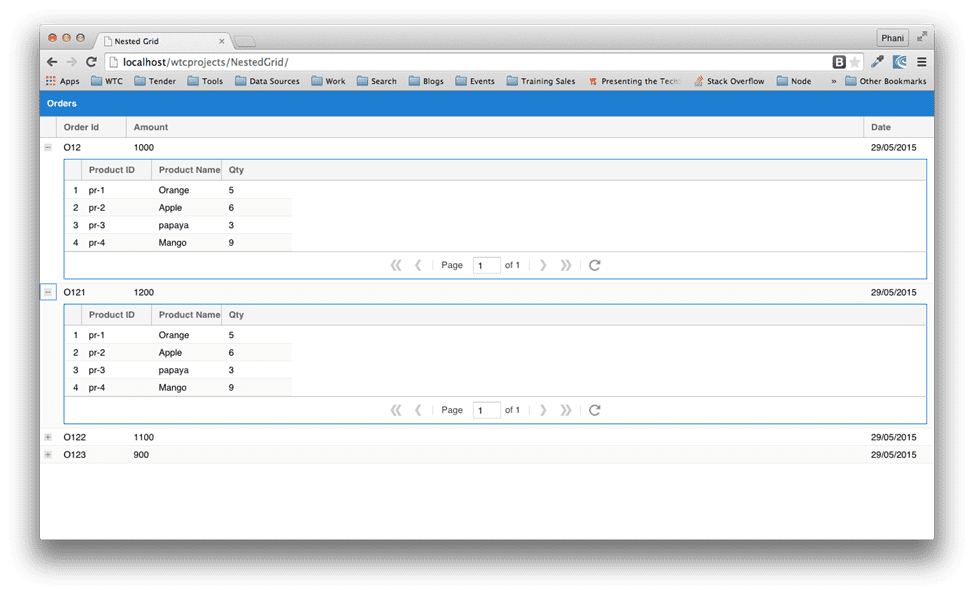 You can find a new plugin RowExpanderGrid extended from RowExpander plugin, which can help you add child grid to the row, more easily. It is part of the shared article code.

Now you will notice that on mouseover or click events there are lots of console errors and grid does not behave as it should. Let us see what is causing this issue.

Below is the HTML element structure of NestedGrid.

Because of this structure when mouse events fire on the child grid elements are handled by parent gridview followed by child gridview.

Let us see how to solve the issue

Following are the solution steps: 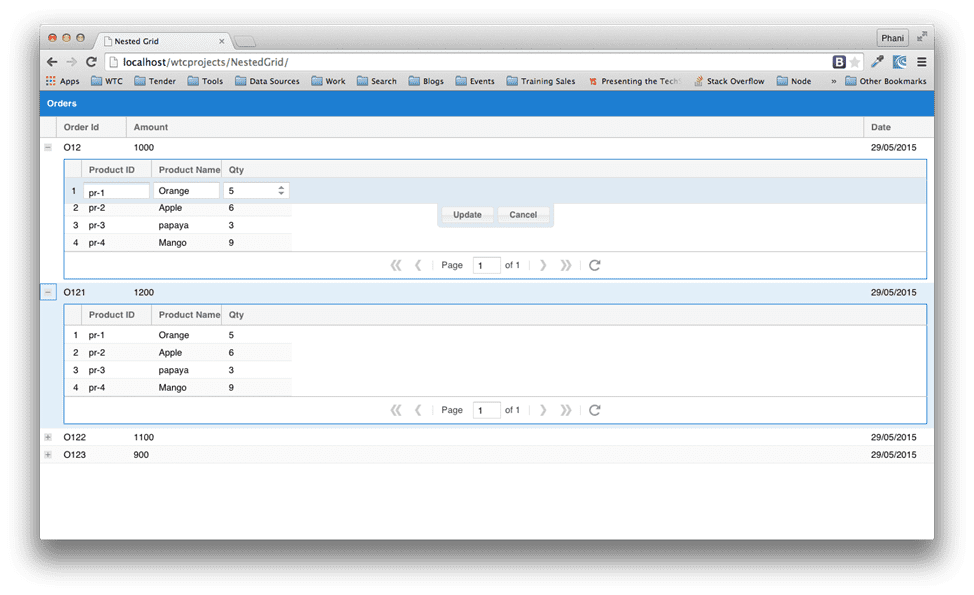 You may try the code on Sencha Fiddle and let me know how did it go!

In this article we learned how to solve the issues when we add a grid inside a grid using rowexpander plugin.

ExtJS 6.2.0 Early Access is out. There are good number of new features included in ExtJS 6.2.0. One…

Hi Phani,
It’s a cool extension you have made over there and well explained. How is the behaviour on including features and plugins to either of parent or nested grids. Locked columns, summary,filtering and etc?

ExtJS 6.2.0 has got rowWidget Plugin using this we can have nested grid as well.

how we can make this GWT ?

Thanks for this article. Is there a way to make grid selection mutually exclusive. I mean if i select any child grid record, any previously selected record in any other child grid should be cleared and new selection should persists. Same is the case with parent & child, if i select parent row and then click on child the parent row should get dis-selected. Any suggestions would be much appreciated.

Hi Sujay,
AFAIK their is not config available in the frame work to this.. We have to write code for this behavior listening select,selectionchange events on the parent and child grid and deselecting the other grid records.

How can I display a grid inside the the grid column without using any plugin like Row Expander with the parent grid data in same column?

Hello Inamullah,
If i understand correctly, you want to display a grid in one column of the grid instead of displaying the child grid occupying the entire row.
You can try with widget column.

Hello Phani,
I have tried it with widget column and grid displaying perfectly but the data is displaying in the grid for the Last response of the API ,
The data is duplicating in the child grid.
Please provide a suggestion to overcome this problem.

Hello Phani,
I tried it through the widget column but the data is coming in the child grid is for the Last API response of the parent grid, and I want the different records in each child grid as per the API response. Please help me in doing this.
Thanks
Inamullah Ansari

Thanks for showing the interest and glad , we were able to answer few of your questions. To have a elaborated discussion and see how we can benefit you, can you share your email or any mode of contact?