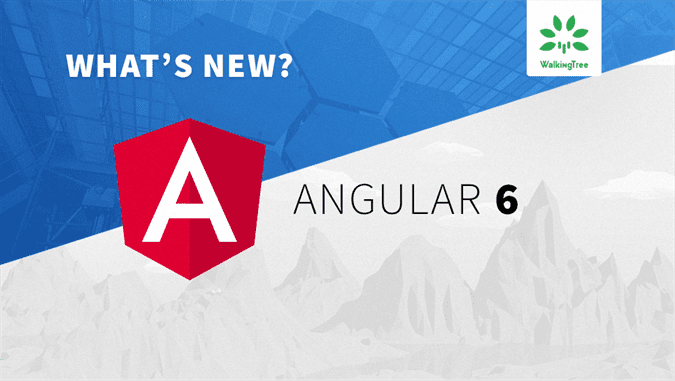 As many of you already know Angular 6 RC2 is already out and GA will be released any time soon. As release date is nearing, many of us will be curious on kind of features that are being released and overall the advantages we gain with this release.

At outset, This release makes Angular lighter, faster and easier. Developers will start loving it more as it makes their development further easy.

With the support for 2.7 in place, now it will be much easier to code with conditional type declarations, default declarations and strict class initialization. For complete details of TypeScript 2.7 kindly refer link.

This package is primarily designed to take an advantage of web components that are being supported by all modern browsers(Except Edge). This will allow you to create an Angular component and publish it as a Web Component, which can be used in any HTML page.

Transforming a component to a custom element provides an easy path to creating dynamic HTML content in your Angular app.

The initial version of Angular Material2 was released in March 2016 but was lacking in the number of components, stability, and compatibility with latest angular versions. Now it is more stable and compatible with Angular 6. Many Angular Material2 components are built on top CDK Toolkit which is the Design agnostic toolkit. With this release CDK Toolkit is stable and Developers can use this toolkit to build their own components with less effort as this toolkit already has most of the commonly used utilities to build components.

Ivy Renderer is new rendering engine which is designed to be backward compatible with existing render and focused to improve the speed of rendering and it optimizes the size of the final package. For Angular, this will not be default renderer, but you can manually enable it in compiler options. I will be covering more details about Ivy render in some another blog.

Bazel is a build system used for nearly all software built at Google. With this release, we will start having the Bazel compiler support. When you compile the code with Bazel Compiler, you will recompile entire code base, but it compiles only with necessary code. It uses advanced local and distributed caching, optimized dependency analysis and parallel execution. For more detail kindly refer the link

Currently, in NavigationStart there is no way to know if navigation was triggered imperatively or via the location change. With navigationSource in place, the source of the navigation e.g scroll position or URL/URI change can be identified. restoredState will give the restored navigation id which leads to current navigation. These two properties help us to handle multiple use cases in routing.

NgModelChange – Now this event is emitted after value and validity are updated on its control. Previously, it was emitted before updated. As the updated value of the control is available, the handler will become more powerful

Features which are New in Angular CLI 1.7 and Supporting to Angular 6

Schematics Support – Schematics is a workflow technology for the modern web application development which can apply transforms to your project, like create a new component, or updating your code to fix breaking changes in a dependency Or to add a new configuration option or new framework to an existing project. This helps to build your own scaffolding to the application to help developers in Ease of Use and Development and Reusability.

ng update – We have now a command to automatically update the Angular dependencies of our CLI applications. All your @angular/* dependencies will be updated to the latest stable version which includes all the core packages in your dependencies and devDependencies like rxjs, zone, typescript etc.., and also the CLI itself. This feature saves some effort in migration to next stable version as the developer does not need to manually identify and update the versions of peer dependencies.

Many of us face challenges of growing app size as we add more functionality despite setting some threshold levels at the starting of app development. So far there is no mechanism to warn us about growing app size. App Budgets is a feature in the Angular CLI which allows you to set thresholds for the size of bundles. We will able to configure error messages/warning messages when bundle size grows beyond the configured threshold.

Overall Angular 6 is decent release with a good number of interesting features which makes development faster, deployment easier and bundle size lighter. However, as there is a good number of breaking changes in Animations & Form ngModel, Migration from Angular 5 to Angular 6 will be a bit tricky and interesting.