Setting your code up for success – write secure, reliable, and maintainable code 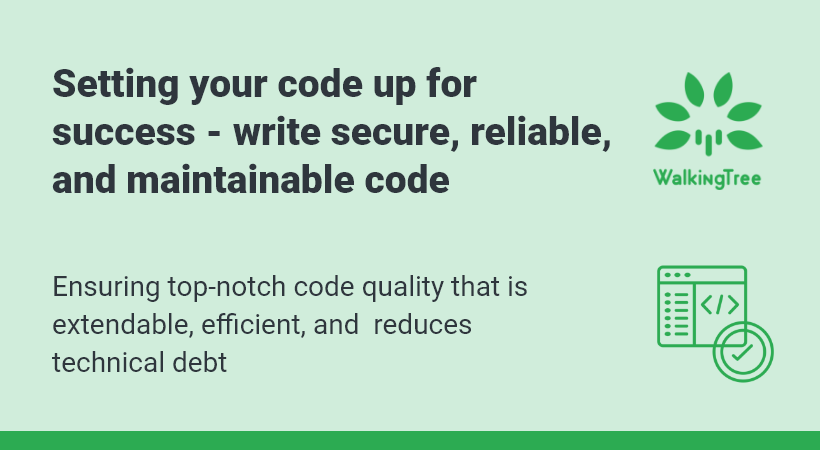 A single line of poorly written code can ruin an entire organization’s reputation, and the results may jeopardize your initiatives. As a result, enhancing the quality of your
code becomes critical and essential for improving implementation results.

According to Gartner, firms who invest in digital immunity will improve customer satisfaction by reducing downtime by 80% by 2025.  Another research by Gartner, as featured in Cast, says more than 50% of AD contracts will require the use of software quality management tools, as leading organizations have begun to include Software Analysis & Measurement (SAM) in their outsourcing contracts to improve code quality and better prepare them to respond to fast-changing business requirements and reduce business disruption risk.

Maintaining code quality while your software team expands rapidly is a major problem. However, even with a consistent number of software developers, maintaining the quality of code can be a challenge. However, the best practices outlined here can help you drastically improve the quality of your code.

If you are already aware of what cod quality is, you can skip to the best practices.

What is code quality? 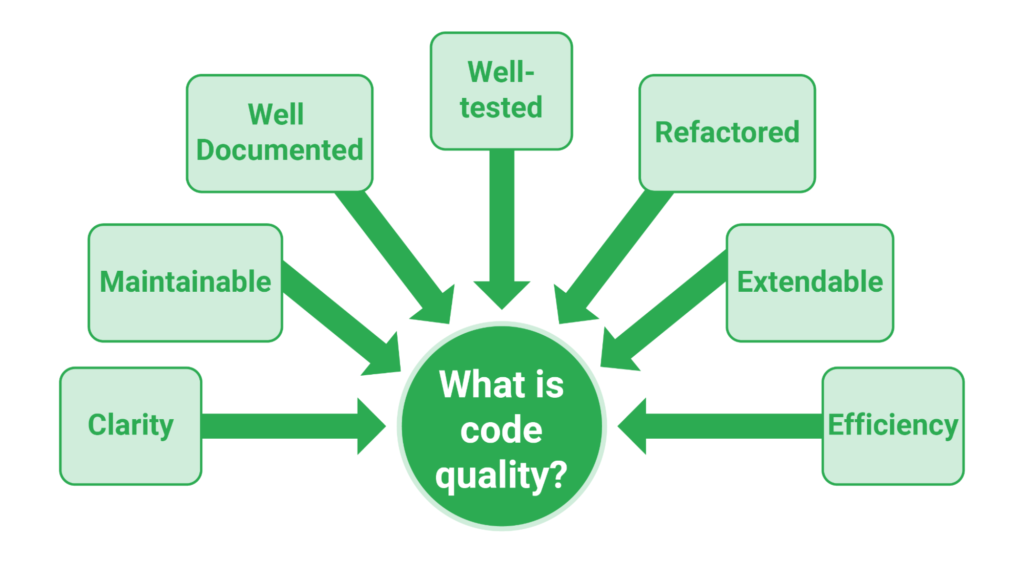 Code quality is a set of attributes and standards that the organization has defined and prioritized. The following are the primary characteristics that can help improve code quality:

Clarity: The code is simple to read and maintain for anyone who isn’t the writer. It is much easier to maintain and extend code that is simple to understand. Not only computers but also humans must comprehend it.

Maintainable: Good code isn’t overly complicated. Anyone dealing with the code must grasp the entire context of the code to make modifications.

Well Documented: It’s ideal if the code is self-explanatory, but it’s always a good idea to add comments to the code to describe its purpose and functions. It makes it considerably easier for anyone who did not contribute to the code’s creation to comprehend and maintain it.

Well-tested: The lower the number of flaws in the code, the greater its quality. Thorough testing eliminates important flaws, ensuring that the software functions as intended.

Refactored: Code formatting must be consistent and adhere to the coding rules of the language.

Extendable: The code you get must be able to be extended. It’s not ideal when you have to discard it after a few weeks.

Efficiency: High-quality code does not waste resources to achieve the desired activity.

A good piece of code does not have to match all of the criteria listed above, but the more it does, the better the outcome of the software would be. These specifications are more akin to a priority list based on the specifics of your project.

How to ensure your code is robust?

Tool or version control to ensure code quality and transparency

Git is the most widely used version control system. It also provides a branching style guide called GitFlow, which facilitates smooth cooperation among team members, and for the development team, it makes scaling simple.

It gives a simple way to track and distinguish between the live product and the less stable developer branch with unpublished features.

When a team member completes a feature, he or she submits a pull request to GitHub. This section describes the request’s content and specifics. 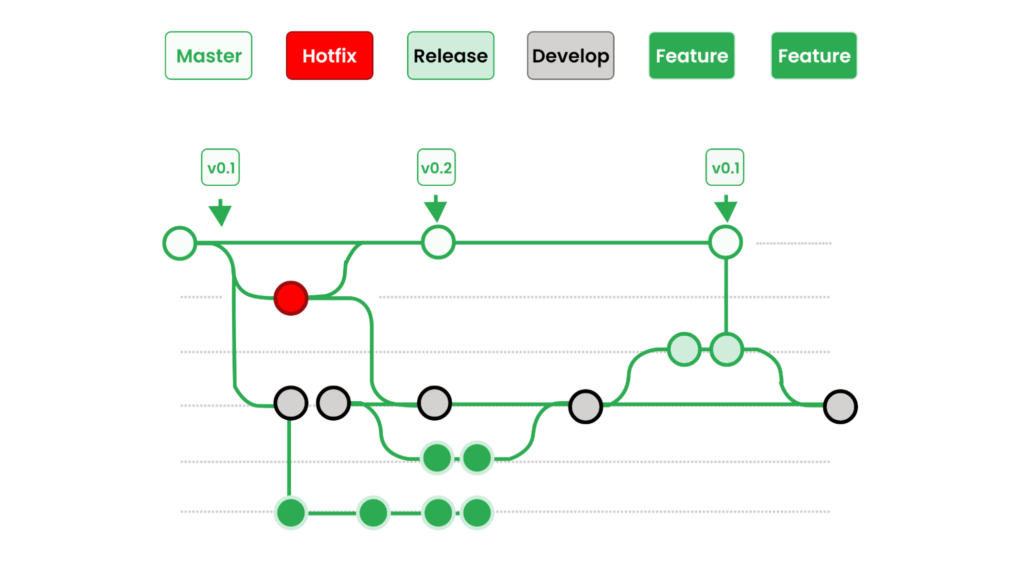 A style guide is a compilation of design principles and conventions. Using a style guide guarantees that every developer’s code looks identical, making it easy to review and work with.

There is no need for you to design your style guide, which is a relief. There are many free guides available that focus on various programming languages and scopes

Sometimes development teams create conventions for a specific project, and other times they create them for the entire organization.

Using a coding standard encourages everyone to write in the same style, which means your coworkers will be able to understand your code more easily. Conventions can also help you discover files and classes in a large project, making it easier for new developers to find and work with them.

Coding conventions dictate a wide range of things, such as:

Use a code linter

A code linter is a program that automatically evaluates your code to verify if it follows the coding conventions of your project or organization. If it does not conform to the convention, linters will display warnings.

Very often these flags are missed during software development because developers seek speed above quality. However, these minor errors can quickly add up, resulting in a big effort for your team. To avoid these heavy workloads, linters detect these issues fast, allowing your team to resolve them as well. Using a code linter from the beginning can help you practice quality coding.

Where should you use a linter?

The linter you use is determined by the programming language you employ — Java, C#, Python, and so on. A Python developer, for example, could use Pylint to analyze code and maintain code quality. JSLint, ESLint, and Checkstyle are some other linters.

While most developers underestimate code architecture when faced with tight deadlines. However, it is very critical not to overlook the structure of the code. The cornerstone of your coding process should be a clear vision of the code and how it is laid out.

Instead of training your team on how to work on different sections better, the primary goal of the review process should be to gauge code quality. The code should be evaluated early on and in small groups to ensure that the minor details are addressed.

Testing code is essential for producing high-quality code. The automation of testing will help to reduce the manual overheads associated with repetitive testing. Test automation can be one of the quickest ways to eliminate poor code quality. However, this does not imply that manual testing can be eliminated. Having a comprehensive test suite allows us to spot code flaws and refactor them with confidence.

Where should we begin? What tests should we prioritize? These are obvious questions you might have

Finally, it is determined by the nature of the program, API, and so on. For example, if you are developing an API, you can rely on API Testing and Unit Testing to be automated. End-to-end testing and unit testing can be used on a web application.

This simple pyramid illustrates how a testing process should be built and where your efforts should be directed.

In general, you should run a lot of unit tests, fewer integration tests, and even fewer end-to-end tests.

A unit test inspects one module of software by simulating dependencies. An integration test demonstrates how separate components interact with one another, whereas an end-to-end test examines the entire client-server round. Depending on your plan, you can employ efficient testing methods such as Snapshot testing, which adheres to test-driven development.

How to measure test results

Tracking test coverage is the most effective technique to assess test effectiveness. It indicates how much of the code (in percentages) is covered by the testing algorithm. To have a better understanding, consider splitting down test coverage as follows: 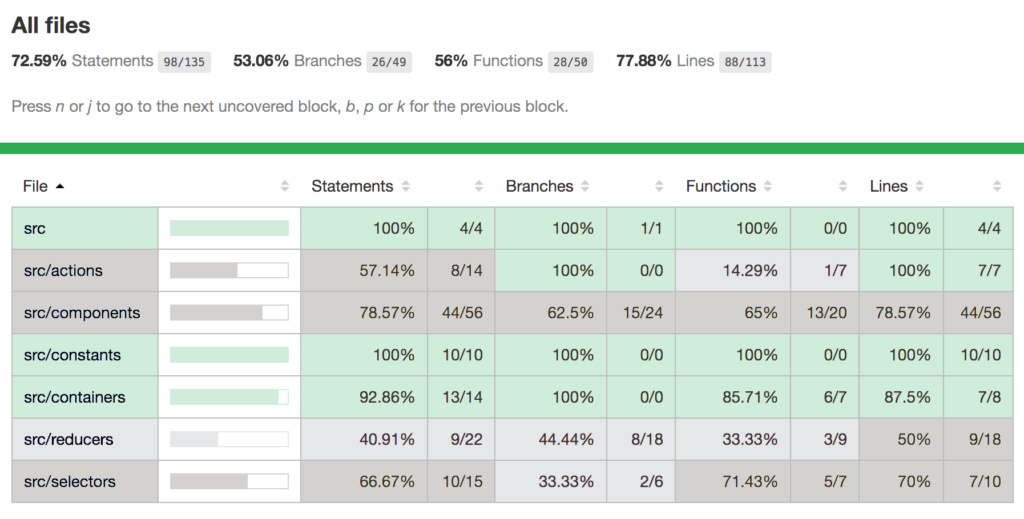 Branch coverage (%) is calculated by dividing the number of executed conditions by the total number of conditions.

Function coverage (%) is calculated by dividing the number of executed functions by the total number of functions.

Continuous integration is the technique through which developers merge their modifications to the main branch multiple times each day (CI). Each merging initiates an automated code build and test procedure, which takes a few seconds to complete. However, if an issue occurs, the code build does not run, and the CI system prohibits it from progressing to the next phase. The team then receives a report and can promptly correct the problem.

This is why CI is commonly employed in current businesses. It enables teams to divide the development process into smaller portions, ensuring more attention to detail. And developers receive immediate feedback, allowing them to avoid problems during the deployment step.

Jenkins, Bitbucket Pipelines, CircleCI, Codeship, TeamCity and Bamboo are some of the CI tools available.

What is the best tool for your business?

The current continuous integration solution is essential for empowering a high-performing engineering team. There are several critical considerations to think of when selecting a CI tool for your team, including VCS(version control system) support, container support, and plugins and integrations.

Developers occasionally add comments that aren’t required to comprehend the code. This type of chaos can cause developers to spend more time reading through the code. On the other hand, some individuals leave very few comments, resulting in low-quality code because programmers must guess what they’re reading.

Finding a happy medium should be your goal. Only add comments when you believe they have some validity and can add value to your codebase. The following guidelines will assist you in writing insightful comments:

/* The class below will help to find the item record with a unique identifier. It returns an item */ public class ItemCategory { rest of the code goes here }

Why Code Quality is important?

So far, we have found out what is code quality and its best practices and now let us see why is it important? Is it that important to be considered during all software development routines? Yes, it is, and we see a few points stating why.

Is it that important to think about it during every step of the software development process? Yes, it is, and we can see a few reasons why. 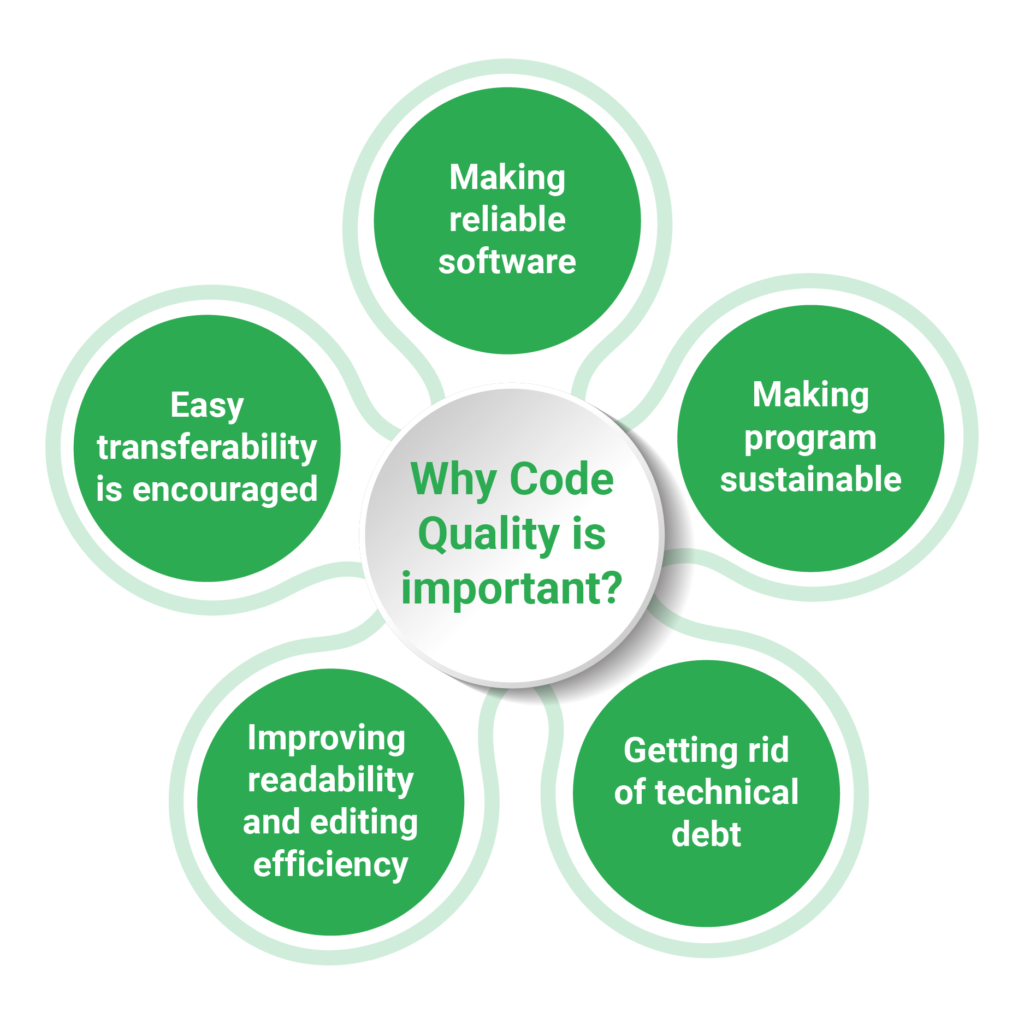 End-users feel very uncomfortable if they receive a strange message when they do something wrong in software. Here is when robustness comes to play. The software can cope with errors during execution despite unusual conditions. High-quality software has clear and understandable error messages for end users.

When software can endure throughout time with few changes, it is said to be sustainable. The average software life is estimated to be roughly six years, while bad software quality only lasts half that time. It’s because, as operating systems and hardware evolve, the rate of software change accelerates. It’s difficult, if not impossible, to conduct transformations on poor-quality code.

Getting rid of technical debt

Software development is a high-budget job that requires software to work for as long as possible with few errors. However, low-quality software is certain to fail early unless a large number of changes are introduced into the program regularly, increasing the technical debt. Extra development work takes time and money, which a well-written code prevents.

Good code quality ensures that codes are written in a way that makes them easy to read. Some factors include the inclusion of comments, adequate indentation, unambiguous notations, and a simple flow. High-quality code is also easier to read and update, making editing it a more pleasant experience. Code communication is more straightforward, which encourages inter-team learning.

A high-quality code, as previously stated, has high readability and is simple to change. Another benefit of code quality practices is that they make software translation across platforms much easier. With so many platforms on which software must run, it’s critical to have direct portability with little changes.

What we are trying to say is…

Writing high-quality code results not only in higher-quality products but also in increased team happiness. By using the best practices you can set up a workflow for your team that ensures everyone’s code adheres to the same style guide and passes specified tests to ensure functional quality.

To know more about code quality that can help you make your software compliance process easier, do drop us a line at connect@walkingtree.tech!