Many of us aware of the fact that we are living in a world of apps. With a tiny device(Mobile) in your hand, you will be able to perform many tasks single-handedly. Be it paying the bill, talking to your manager, attending an important conference call with a new prospect customer, booking a weekend trip with a girlfriend, listening to favourite music and whatnot. All of these things with possible with a simple tiny entity called ‘app’.

Growth of smartphone usage, availability of apps for certain task, penetration and availability of quality internet happened at the same time. Especially without strong internet penetration, growth of smartphone usage should have been limping and availability of apps would also have been very very less. With this strong bondage between apps and the internet, the general expectation is precipitated that apps will work only when there is the internet. So most of the apps adopted that behaviour where the majority of the apps are online-only apps.

In the blog, we discuss in detail the relevance of offline first mobile apps.

It is pertinent to know the evolution of mobile apps to better understand the current-day relevance of offline-first mobile apps.

The first mobile app was very simple. It was first introduced in IBM’s Simon in 1993. The apps functionality is simple like a calculator, notepad and simple games. All the apps are prepackaged in mobile and there is no way the user can remove or upgrade the apps. All the apps work within the mobile. Apps are not in a position to communicate with the external world

The first mobile app which can communicate

From 1993 to 2002 there are a lot of mobile apps which are prepackaged into the app but none of the apps is ready to communicate with the external world. In 2002-03, BlackBerry introduced phone which supports Push email, mobile telephone, text messaging, Internet faxing, Web browsing through apps. Around the same time, PalmOne introduced a smartphone which allows multitasking i.e. you can check the calendar while making a call. Apps reached a state where there can they can communicate with the external world but all the apps pre-packaged into Mobile. No chance of adding new apps, upgrading or removing not so required apps.

In 2007-2008 within a small gap of time, Android and Apple introduced their own play store, where external teams can upload the apps into the store and users can download the required apps from the store directly. Android and IOS were released as platforms where people can develop the apps and put in play store. This marketplace revolutionized apps penetration and fueled the growth of apps development as a viable and lucrative business. The number of apps and download count of the apps shoot up in very short duration and it unleashed a war between Android and IOS to capture major pie in smartphones(Mobiles with smartapps) world.

In the last 10 years, apps increased significantly as of early 2019 there are 2.1 million apps on Google(Android) Play Store and 1.8 million apps on Apple(IOS) play store. At the same time apps started expanding into other devices which are not necessarily mobiles but were designed to some specific job in the best possible extent. Devices like Amazon Kindle, Echo, google home and many industry-specific devices. To put in another way, many devices that were in existence from a long time to do a specific job will become or becoming smart or became smart by having provision to run apps in it. Traditional desktop operating systems like Windows and Linux are also taking app route to be more relevant to the current world needs. Raspberry PI is another example of a device which is gaining traction because of its portability. In all and all, apps are going to rule the roost in the days to come.

The growth story of apps is incomplete without mentioning the internet. Expansion of internet fueled the growth of apps, the more the data internet can transfer in a fraction of second the more smarter apps are becoming. As the Internet is expanding from 2G to 3G to 4G and 5G, apps moved from Mail Push to Conference Call to Speech to Text to AI-Driven.

Below diagram depicts the overall internet penetration across the globe. North America and Europe are having maximum coverage. 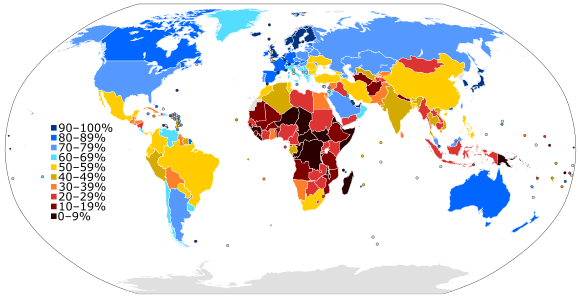 The major part of Asia and Africa are yet to catch up on internet availability. But these are the regions where a lot of people are living and there is a potential business opportunity if apps work without internet. Even in North America and Europe, there are places where the internet connection is intermittent and the quality of service is not top class. For example, in aeroplanes connectivity is almost not there. But many of the users find free time while travelling. If apps are enabled to work and give quality experience during this time also the users will best companion in the apps.

The current state of apps with no internet

The relevance of offline-first apps

Over a period of time users expectations on apps increased significantly and any small glitch that apps face due to poor connectivity or lack of internet at that time is becoming a serious challenge for better adoption of the app. The new age expectation is app should work irrespective of internet availability and if it has to fail, it should fail gracefully.

For example, you have project budgeting app that helps your customers to plan project budgeting for their projects. If one of a customer is travelling on an aeroplane and realized that he forgot to add an important cost component for one of the projects. He opens up an app to realize that he can not add anything unless the internet connection is there. This is where you loose on a solid opportunity to give a better customer experience. If your app does not have offline support, then customer has to take note of this cost somewhere so that he will not forget this again and update it in the app when the internet is there. Your app is pushing him to do double the work in the best case. In the worst case, he may even forget this cost component until it creates damage to the project. Customer will be comfortable as long as you allow him to add the data and syncing of data can be done later. The above one is one such example and you can find similar use cases for many of apps that you are involved.

When the apps are working even when internet not readily available and data sync happens based on the availability of the internet then demand for internet will grow in the region where internet services are not there. In this model, apps will drive the growth of the internet. Better Internet will facilitate the consumption of more apps. This way a progressive growth trajectory can be created. This will become a simple and powerful case of complementing growth. African continent and part of the Asian continent provides a beautiful opportunity for this model. ,

On the other side of the spectrum, apps are being deployed not only in mobiles but on a wide variety of devices for a definite or specific need. These devices may or may not have internet but apps should work. Devices will become more powerful as they hold apps which perform defined tasks and apps are smart enough to consume the data from the external world as when the internet connection is available. Some of the devices can be AI-driven devices when we follow this model.