In olden days elephants were used to carry heavy loads. But loads that need to be transported were getting heavier at tremendous pace. Our older generation was so vice that they did not look for bigger elephants to transport bigger load, instead they harnessed multiple elephants together and distributed load uni-formally and started transporting heavier loads.

With same analogy, the size of the data that needs to processed, understood and analyzed is increasing in tremendous pace day by day. Even high end servers are not in a position to handle this data in an effective way. Server configuration is not able to scale up with the pace of data size.

This is where Hadoop comes into the picture. Hadoop can be compared with a group of highly disciplined, well trained group of elephants which will work under single master. Hadoop is built for processing huge data by an uniform and planned distribution of work among multiple slaves.

Hadoop is master a slave architecture where master decides on who should what and slave will do the real the work and report to master. 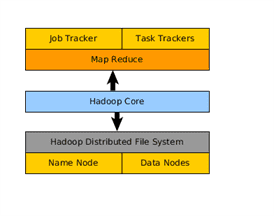 Hadoop can be used in  all the functional domains where large data needs to be stored, processed and computed. Here we will cover the list of domains where hadoop is being used. Broadly we cover high level use cases in each domain

Use of hadoop in various popular social networking sites

It is the base project of Hadoop and it takes care of communication among multiple other modules. It is one of the core components

Hadoop is highly scalable and distributed storage/computing framework. It is being used in different domains and it is positioned well to play bigger in big data computing.

Hope you enjoyed reading this article.