Data Ek Ram – an admiration to the importance of data

Having a strong interest in analytics, this indeed sounds exciting to me. Also, I am a big fan of the Bhajans of “Hari Om Sharan” and all the gaga over the data gives me just one thought – “Data ek Ram – Bhikhari saari duniya!“.

In this article, I would like to reiterate that “Hari Om Sharan” was absolutely right – even when the context is the data stored in devices.

Change is the only Constant!

Whether we actively participate or not, changes will happen and we will be impacted. Every change generates tons of data and when they are processed with appropriate context, it provides us opportunity to learn tremendously. People have been drawing parallels between the human brain and computers for quite some time and indeed they seem to complement each other really well.

While human brain does seem to have an advantage in certain areas, computers have clear advantage in many other areas.

According to Russell Ackoff, a systems theorist and professor of organizational change, the content of the human mind can be classified into five categories. 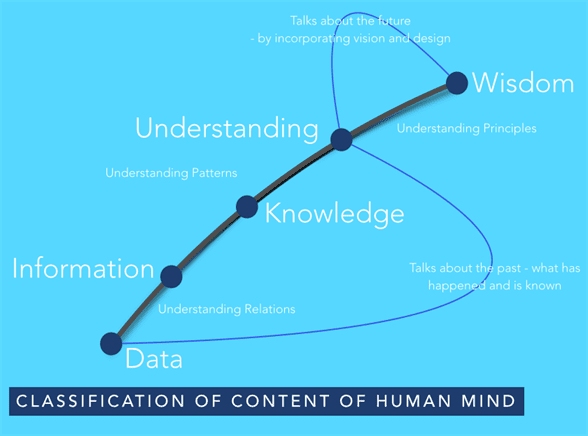 Basically, data is raw observation / assumption – a symbol without a meaning on its own, which needs to be given meaning through required processing to be able to answer questions like “Who”, “What”, “Where”, and “When”, which eventually acts as meaningful information for us. When the information is used in a connected way then you develop better understanding and start responding to questions like “How”. Of course this is more than analysis, which focuses on the piece of data, we are talking about thinking in a connected way by combining data pieces using appropriate context. Most of the people are focussed on solving this puzzle of “How” – understanding how one would like to do certain things and thus influencing his/her decision by providing the required level of convenience. May be with an extra level of data processing capability and required level of connectedness, the devices may also start justifying the “How”, by answering “Why”  the suggested approach is the most suitable for him/her. However, to correctly answer such a question requires a true cognitive and analytical ability – the ability to make use of past as well as new information and apply interpolative and probabilistic process.

I will not be surprised if we can achieve predictable and accurate response for most of our “How” related questions. Further, the storage capability and fast searching ability would mean that the devices may be able to even learn to express the most suitable emotions – and yes there could be sensors to take care of your five senses (aren’t they already being taken care to large extent through the usage of camera, microphone, earphone, touch devices, smell / smoke detectors, etc) as well.

However, there is some part in me which is still defensive. It says, machines cannot be smarter than humans.

The human being always had the “Heart” and the “Mind” and these two parts of the body have been used reasonably well over thousands of years. The heart has been often tricky to understand. This is where I start doubting the capability of devices – specifically when it comes to giving me the suggestions based on the human consciousness, which has evolved over a period of thousands of years.

Add to that the “Wisdom” factor and it looks like the Pundits are missing something! The machines have always been told to be deterministic and probabilistic, while the wisdom has been extrapolative, non-deterministic and non-probabilistic – often driven by various levels of consciousness and wiring like ethics, morals, social and cultural values, etc. Call this philosophy – if you want! Wisdom looks pretty close to humanly state and it does require soul.

And SOUL choose body and it will never enter into a machine!

Hmm … this definitely makes me feel good for now.

Who cares for wisdom?

However, the fact is that we often get into the mode of “it’s my life“! People do want to experience the world and enjoy while they are alive. Some of them of course want to leave a mark to make this world a better place. Assuming that they are assured of survival (now hardly anyone gets “Amrit“)  for a given duration, people are continuously looking for convenience and pleasure. The basic nature of any animal (oOps human being) is survival of self, then “us” and may be “them” – as they might contribute into its pleasure / survival.  Everyone believes that they are unique and the world is made for them. Where is the wisdom?

The fact is that people (well most of them) do get convinced by logic. The brain and the device – hence the DATA – seem to have a greater influence on day-to-day decisions. A knock at the door of the heart takes place when there is no single logic indicating an answer towards a profound YES. With the availability of linked data, with appropriate context embedded in it, THAT YES, seem to be not too far away.

Human being would like the computers / devices to take care of most of the things, except for the activities which endanger their survival. They indeed make things easier and faster and I am sure human being will push the technical boundaries for achieving ultimate convenience.

This is what makes me remember the devotional song – “Data ek Ram – Bhikhari saari duniya!“.

You can put the Human Vs Device and ask them to compete or just let the machine be an aide to the human being. I would assume that Human will continue to innovate and keep creating awesome machines. They might use the same machine to manipulate their own fraternity – the fellow human being. And, of course machine will learn from us the fellow human being. But when we are so confused and we don’t know ourselves completely, I wonder how confused the machines will become! The amount of data being generated every second is tremendous and just a thought about the possibility of what can be done with these data is overwhelming. 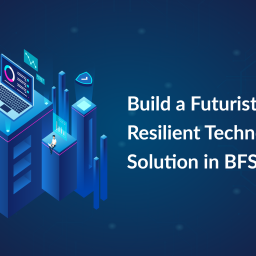 Build a Futuristic and Resilient Technology Solution in BFSI Industry

One of the most innovative things that came up in the banking sector last decade was internet banking….