Quite recently, I laid hands in building an application that would comprise of ExtJS and Node.js. This application needs to communicate with various third party applications through SOAP services.

One of the third party applications that I need to take into consideration is ADempiere. However, while consuming default ADempiere SOAP services I came across a few issues. In this article, we will see how to consume SOAP services from node.js application and also find out how I fixed the issues that I was facing.

There is a package/module available in node to consume any soap services i.e node-soap.

Let us see how I  tried using the node-soap module.

Step 1:Initiated a node application using npm init. Inside a new directory I have created for this sample with the name adempiere-node 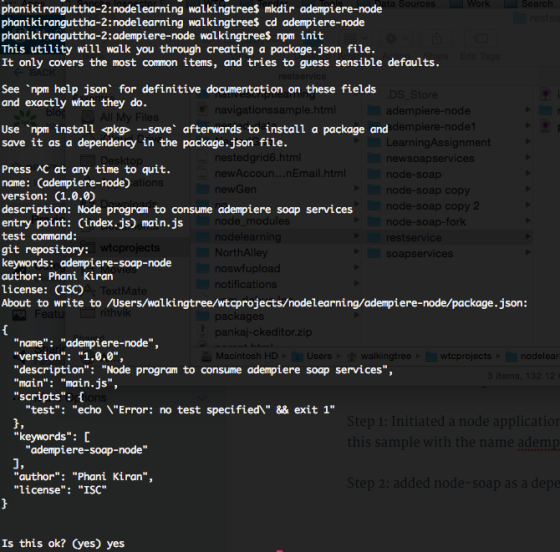 Step 2: Added node-soap as a dependency in package.json created in earlier step 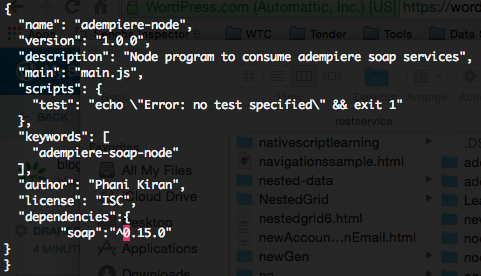 Here node-soap module package name is “soap” and the current version is 0.15.0

Fixes to the node-soap module

Follow the steps 1-3 as described above now our node program can consume the ADempiere soap services. And the output was

These fixes are pushed to node-soap git repository and the changes were merged to the master repo. Commit for reference.

I would like to thank Joseph Spencer and Heinz Romirer for spending their valuable time in helping me to contribute my changes to node-saop repository.

You may try out the code on GitHub, and let me know how it went !

In this article, we have learned how to consume soap services in Node.js application. This sample has soap module internally with my fixes. Next release of node-soap will have these fixes.

hi, can you help me create a SOAP web service example, backend with nodejs+express and frontend with angular .Thank you

how to consume wshttpbinding in nodejs? you have any idea.